From Kevin Vallier's new blog reconciled:
Today I’m launching a blog to talk about issues surrounding reconciliation, particularly how people with diverse perspectives, tempted to live at odds with one another, can cooperate nonetheless
This project seems very promising, and Kevin will share his thoughts on various papers that deal with social trust, starting with the well-cited Bjørnskov 2007 paper "Determinants of generalized trust: A cross-country comparison".
Trust, Blogs
Here are my slides from my presentation at the American Public Choice Society meeting in New Orleans, March 2-4. Full paper is here.
The moldable young (American Public Choice Society 2017) from Andreas Bergh
Institutions, Trust
Can inferior institutions destroy social trust? In a recent working paper (w Richard Öhrvall) we shed some new light on this question by studying social trust among Swedish expatriates in different types of countries. Obviously, Swedish expatriates are strongly self-selected (as we confirm in the paper, mainly on subjective health), so our main interest is in whether length of stay tend to affect trust differently in countries with different types of institutions.
As (perhaps) expected, it does. But the effect is driven entirely by those who were young when they moved to the new country.
The graphs below show how social trust (measured on a 0-10 scale, corrected for individual characteristics) varies with how long the respondent has lived in the new country. Worst, middle and best refer to the destination countries divided into thirds based on their score in the corruption perception index. 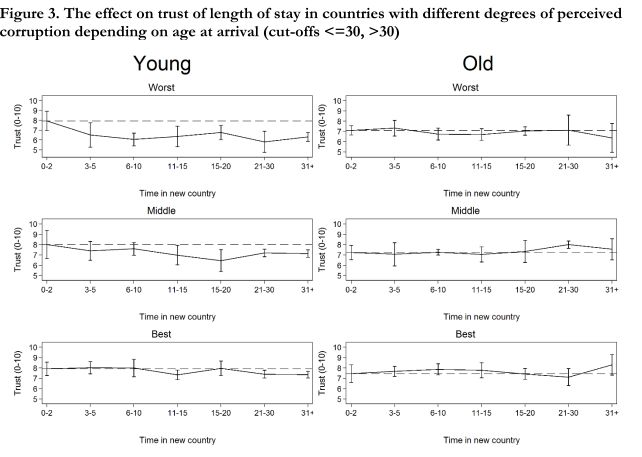 What we see is that for those who were older than 30 at the time of arrival, social trust is remarkably stable. Even in the most corrupt destination countries, swedish expats who have lived there several decades are as trusting as those who only just arrived. Among expats that were 30 or less, there is a marked decrease in trust for those who have lived longer in the most corrupt countries. Note however that after 10 years, there is no evidence of a further decline.
(Graphs look similar if we instead use legal quality as measured by the second dimension of the economic freedom index).
Trust