This is a HORRIBLE abstract: It has the motivation, the question, the method, the data - and a claim about the findings being important. But not even a sentence on what the findings are.
Studies that focus on individual-level determinants of support for right-wing populist candidates and parties find little evidence that trade-induced economic hardship is important. By contrast, research that analyzes aggregate data often comes to the opposite conclusion: regions that are highly exposed to trade are more supportive of populist parties and candidates than other regions. To address these contradictory findings, we argue that import shocks engender a broad-based response at the regional level, beyond those whose economic interests are immediately and directly affected, and that this reaction is mediated through xenophobic beliefs about immigrants. Using individual-level data from the eighth wave of the European Social Survey (2016), regional import shock data for nine European countries and causal mediation analysis, we explore how imports affect support for right-wing populists in Europe. Our findings have important implications for understanding the relationship between individual- and contextual-level factors and support for the far right
Source: Hays, J, J Lim, och JJ Spoon. "The path from trade to right-wing populism in Europe". ELECTORAL STUDIES 60 (augusti 2019). https://doi.org/10.1016/j.electstud.2019.04.002.
Populism, Abstract, Trade
Here, in EER, is paper that is interesting in many ways. The authors:
Albanese, Giuseppe, Guglielmo Barone, och Guido de Blasio. "Populist Voting and Losers’ Discontent: Does Redistribution Matter?" European Economic Review 141 (01 januari 2022).
From the abstract:
We show that fiscal redistribution matters by comparing Italian municipalities equally hit by the economic shocks leading to populism but, at the same time, very differently exposed to the generosity of the EU structural funds, because of their locations on the two opposite sides of the geographical border that determines eligibility. Estimates resulting from a spatial regression discontinuity design show that in 2013 general election larger EU financing caused a drop in populism of about 9% of the mean of the dependent variable.
In many ways, the paper is a crystal clear paper with a credible identification strategy. Because transfers from EU structural funds are targeted to "Convergence Objective regions", there are strong discontinuities between municipalities: 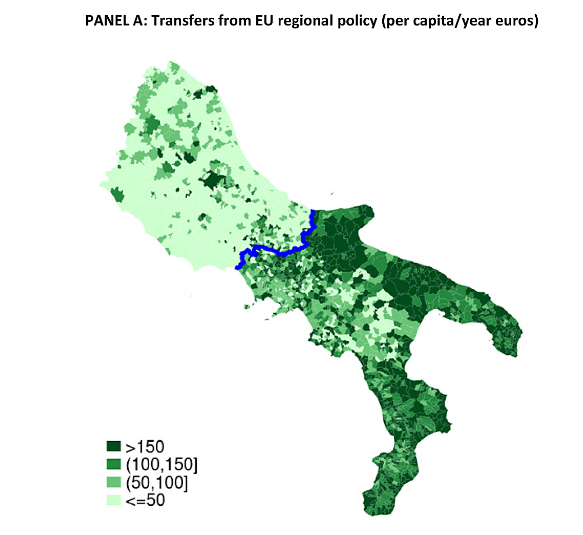 and it seems that populist voting is more common in municipalities that do not recieve transfers: 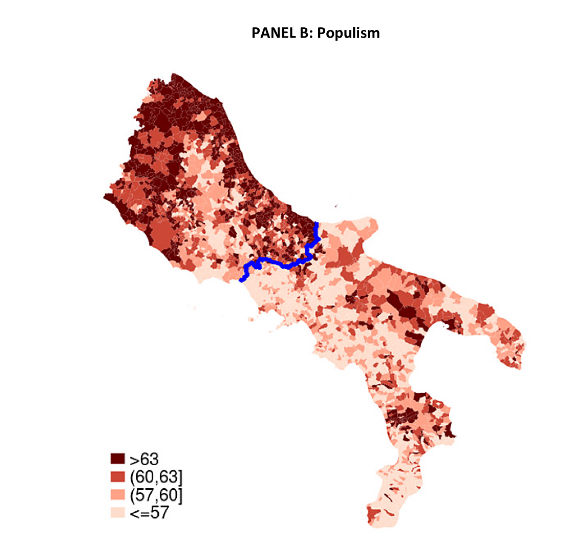 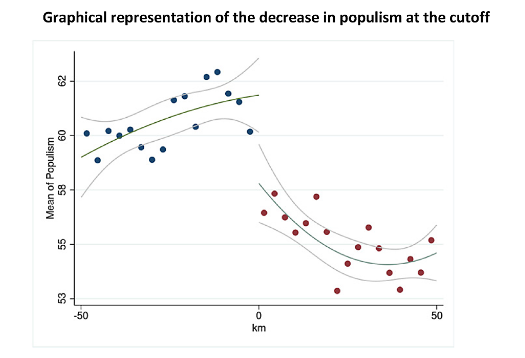 As can be seen, average populist vote share falls from about 61 to 58 percent at the eligibility cutoff. Their conclusion:
We have shown that financial transfers injected by the EU regional policy toward Italian lagging areas have had the ability to reduce the anti-establishment component of populism.
That interpretation is indeed possible. But it seems to me that another interpretation is also possible:
Not receiving EU-grants when neighbouring municipalities (or when some parts of the country) receive grants causes resentment and fuels populism. If there were no structural funds granted to any municipality, how much populism would there be? We do not know.
Thus, despite being a crystal clear paper with a credible causal identification, we do not know if EU-grants cause or mitigate populism - because we do not know the counterfactual.
Populism 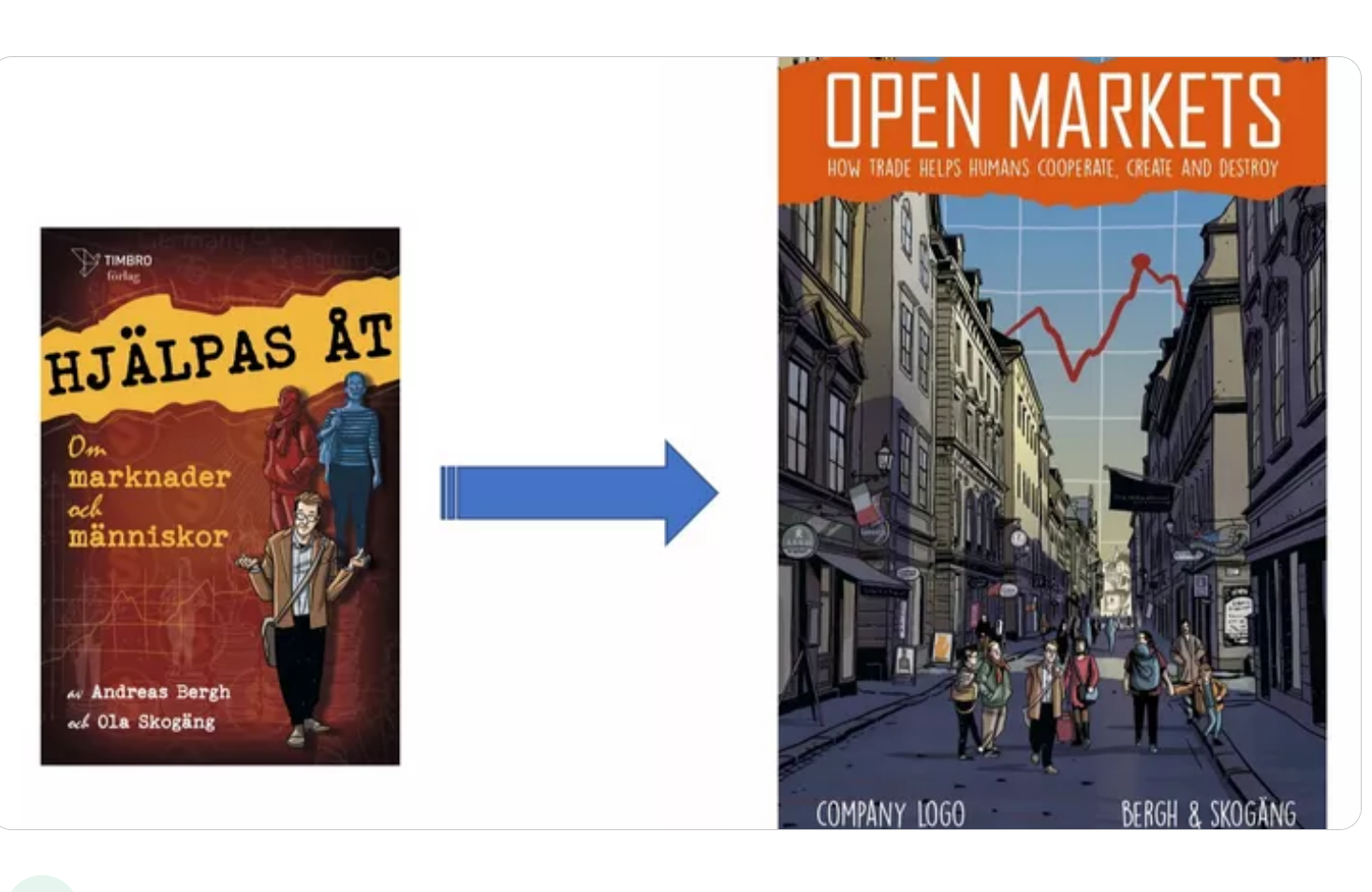 Good news: If things work out as expected, my graphic non-fiction book on markets and economic freedom, released in Swedish last year, will be published in English (with the Swedish publisher Idealistas) later this year.
The book is an illustrated book that explains the benefits of markets and economic freedom. It is based on research but it is non-technical and accessible. The book is similar to Bryan Caplan´s Open borders, but my book is much broader: It deals with the market economy in general, and discusses several misperceptions about the market economy.
The basic message of the book is that the market economy is a tool that helps people work together to achieve their goals. Here is a sample: 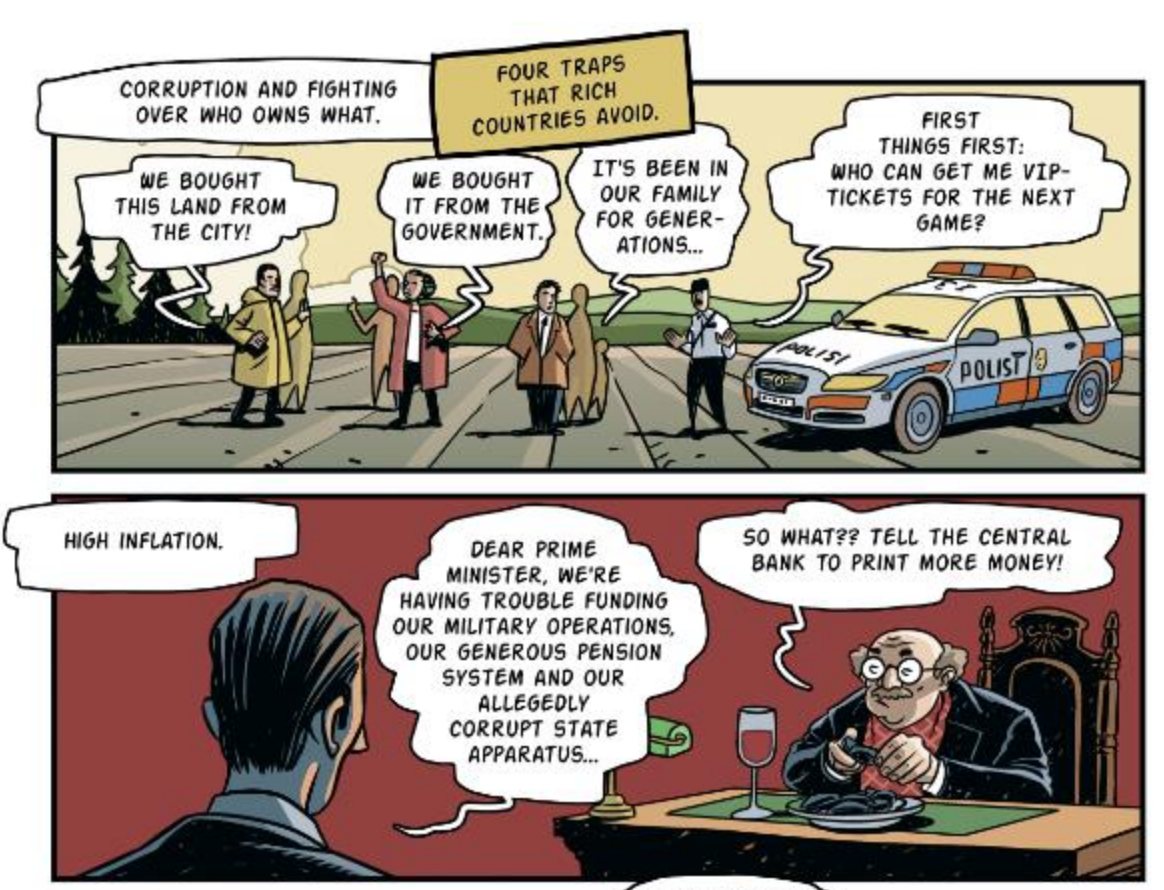 I am now raising money for the final stage of the production. Thanks to th Institute for Humane Studies and the Hayek fund, I have a very good translation to work with. The english version will be paperback, rather than hardcover (I actually thinks that woks better for a graphic non-fiction book). Hopefully, you will soon be able to order it on Amazon.
Books, Economic Freedom, Market Economy
Delayed by one year, it now seems this event will actually take place at Kennesaw State University in November: 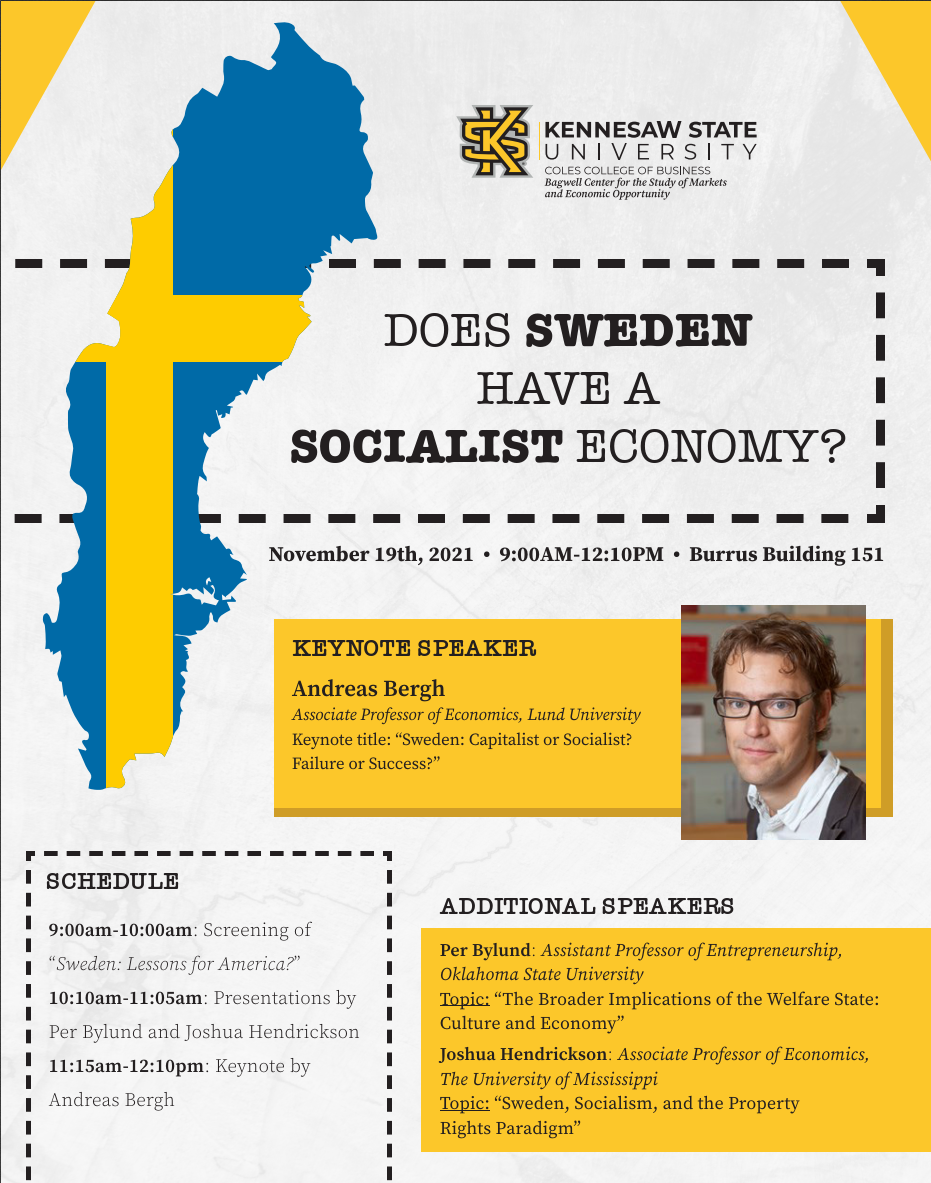 For those interested in reading more, here is the paperback version of my book, and here is my latest related paper on Hayekian welfare states.
Talks
Yougov measures (using sample and weighting to create something they claim to be representative) which countries Americans think are socialist. It may seem like an odd thing to measure, but the results are rather interesting: 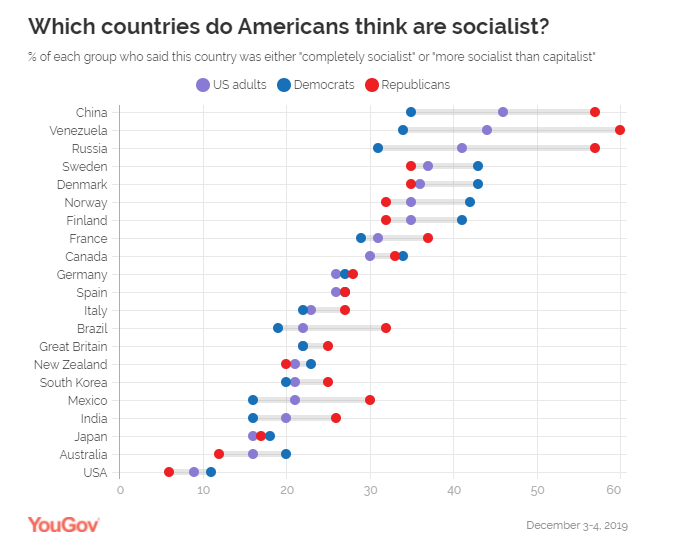 Three thoughts:
Institutions
A long time ago, I wanted to examine how (or if) increases in economic freedom correlate with changes in income inequality. As I immediately found out, my friend and colleague Niclas Berggren had already attacked the question in Public Choice back in 1999, although with mixed results based on the limited data that were available at the time.
Together with Therese Nilsson, I published some more robust patterns in European Journal of Political Economy in 2010:
Using the Standardized World Income Inequality Database, we examine if the KOF Index of Globalization and the Economic Freedom Index of the Fraser institute are related to within-country income inequality using panel data covering around 80 countries 1970–2005. Freedom to trade internationally is robustly related to inequality, [...] Reforms towards economic freedom seem to increase inequality mainly in rich countries, and social globalization is more important in less developed countries. Monetary reforms, legal reforms and political globalization do not increase inequality.
Still, the field as a whole was full of conflicting findings, as demonstrated for example by Bennet & Nikolaev in 2016:
we replicate the results from two significant studies using six alternative measures of income inequality for an updated dataset of up to 112 countries over the period 1970–2010. Notably, we use the latest release of the Standardized World Income Inequality Dataset, which allows us to account for the uncertainty of the estimated Gini coefficients. We find that the results of previous studies are sensitive to the choice of country sample, time period and/or inequality measure used.
A couple of years ago - in Ohio of all places - Christian Bjørnskov fiddled around with a new data source: The global consumption and income project, and we started a paper that just came out in Kyklos:
Bergh, Andreas, and Christian Bjørnskov. 2021. "Does Economic Freedom Boost Growth for Everyone?" Kyklos 74(2): 170–86. https://onlinelibrary.wiley.com/doi/10.1111/kykl.12262 (April 13, 2021).
The paper essentially does three things

Potentially, this explains the mixed findings in studies using the Gini-coefficient.
From the paper:
To illustrate the size of our estimated associations, we note first that (as shown in Table 1) incomes grow on average between 8% and 9% over a five-year period in our sample. Based on the estimates in democracies, a one standard-deviation increase in institutional quality is associated with roughly 6 percentage units of higher income growth in quintiles one and five, and roughly 4 percentage units of higher growth in quintiles two, three, and four. While these differences are in line with the idea that economic freedom reforms benefit mainly the top and bottom of the income distribution, the differences between quintiles are far from statistically significant
New paper out, in Scandinavian Political Studies:
This note describes how research on the link between economic openness and government size has changed over time. Early interpretations suggested that countries develop welfare states to compensate for volatility caused by economic openness (the compensation hypothesis). Recent findings have cast doubts on this interpretation. For example, more open economies are on average not more volatile, and economic openness does not unambiguously increase the social security demands from voters. Some recent studies suggest that economic openness is particularly beneficial for countries with high taxes and high‐income equality. A re‐interpretation of the compensation hypothesis is thus possible: Through trade, the citizens in large welfare states enjoy some of the benefits associated with cheap labour and high wage dispersion despite their domestic economy being characterized by high real wages, high taxes and a compressed wage distribution.
It's open access!
What the reviewers said about the initial submission:
presents a new and interesting perspective on the cross-country relationship between trade openness and government size and structure
"inspiring"
conceptually unpersuasive [R2. Always R2...]
Here, CNN conveys two important messages about Sweden:
We the Internet TV produced a video on the idea that Sweden has "democratic socialism", featuring Johan Norberg, myself and many others.
It's very good, given the format an concept - but of course I recommend reading my book for the full story :-)
James Pethokoukis blogs at AEI.org
Let’s stop pretending that Bernie Sanders wants to duplicate Scandinavia
He writes:
Bernie Sanders supporters are quick to make clear that their guy doesn’t want to turn America into Cuba or Venezuela or the old Soviet Union. By "democratic socialism," the US senator from Vermont means Scandinavia, more or less. And what’s wrong with that? The Nordic nations are pretty nice. Even President Trump has conceded that Norway produces a quality immigrant.
His point is that the scandinavian countries are in many aspects more capitalist and have higher economic freedom than the US, citing my text in the Milken Review.
Sweden
Previous Posts →