Some background: Swedes began emigrating in large numbers in the 1860s after a famine that was partly caused by frost destroying crops. Photo below is from a ship leaving Gothenburg around 1900. pic.twitter.com/foMdSaIaO2 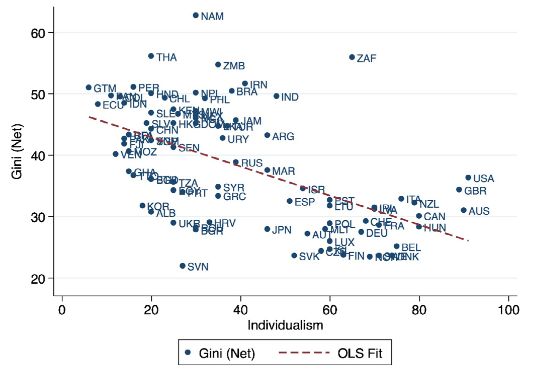 The correlation survives several controls and also an IV-analysis where:
the historical prevalence of infectious diseases, [is used] as a source of exogenous variation for individualistic values
The authors conclude:
even if people in more individualistic cultures are more likely to accept and encourage greater individual differences, they end up living in far more equal societies at the end of the day
My comment:
I wish the authors had explored the role of trust a bit more. We suggest (and find support that) trust causes a more eqaul distribution in a related paper:
Bergh, Andreas, and Christian Bjørnskov. 2014. “Trust, Welfare States and Income Equality: Sorting out the Causality." European Journal of Political Economy 35: 183–99. http://dx.doi.org/10.1016/j.ejpoleco.2014.06.002.
As the map reveals, trust and individualism is closely related 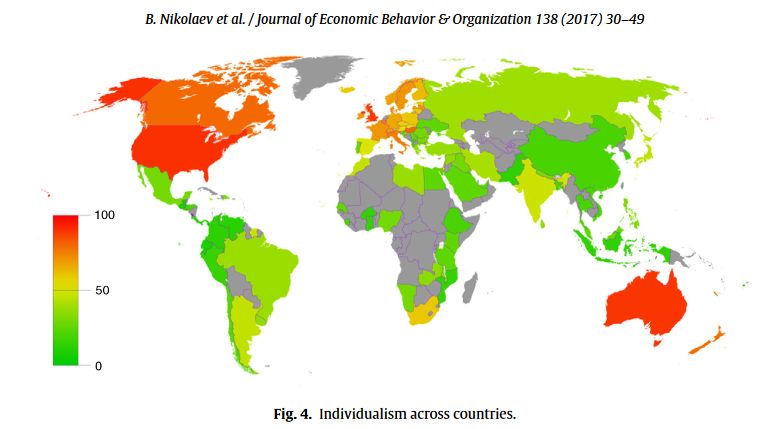 A year ago I published a short paper in Migration Letters. The idea was basically to examine what factors that can explain the pattern that (in most OECD-countries) immigrants have lower employment and higher unemployment than natives. Because there are almost as many theories as there are OECD countries, I used Bayesian model averaging to basically have stata run all possible regressions combining the explanatory variables (starting from row 7) below. 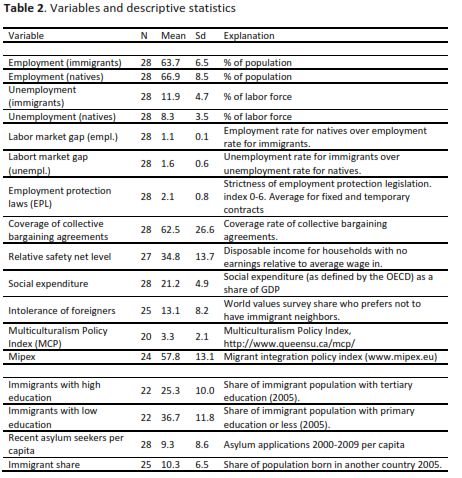 In the paper, the main question is how immigrants fare relative to natives, so native (un)employment is always included, whereas the other x-variables may or may not belong in the model, and the algorithm will calculate a posterior inclusion probability for each variable, and a coefficient for the variable when included.
The main result is that the share of the labor market covered by collective bargaining agreements does far better than other variables, especially for explaining unemployment among immigrants. Based on the bma-results, I discovered the following very simple model for explaining unemployment among immigrants in OECD:

In words: A model containing unemployment rate for natives and the share of the labor market that is covered by collective bargaining agreements can explain 73% of the variation in immigrant unemployment in a cross-section of OECD-countries. 10 pcu higher collective bargaining coverage is associated with 0.9 pcu higher immigrant unemployment rate.
Some have asked me if the same variables explain immigrants' labor market outcomes without controlling for natives' labormarket unemployment. In Sweden, immigrants have relatively high employment compared to other countries, but the gap between immigrant and natives is much larger in Sweden than in most other countries.
While I believe that analyzing the gap between immigrants and natives is a more appropriate research question for the method and the variables tested, it is easy to apply the bayesian algorithm to the same data without controlling for natives (un)employment. For those who are curious, the results are shown below. As explained in the paper, I test two sample sizes (with 21 and 25 countries) because some x-variables are available for relatively few countries. The variables are ranked according to posterior inclusion probability (pip), and before that the coefficient is shown.
Explaining immigrant unemployment
N=21
N = 25
Explaining immigrant employment
N = 21
N = 25
What this means:
Collective bargaining agreement coverage is still the variable that best explains immigrant unemployment. Employment protection laws (as quantified by OECD's strictness index from 0 to 6) also seem to matter. Both varaibles have the expected sign (given that expectations are that immigrants will have lower unemployment on more flexible labor markets)
For employment, intolerance matters: In countries where the share who prefers not to have immigrant neighbors is higher, immigrant employment is lower (most likely reflecting the fact that the nordic countries are highly tolerant and also have high employment rates, especially for women)
Link to datafile (stata)
Stumbled over this course, introduced as follows:
One core question permeates political economy scholarship: how is it possible to combine capitalism (free markets) with democracy (collective choice)? One produces stark inequalities in the distribution of income and wealth, whilst the other (the democratic state), in principle, is based on egalitarianism (one person, one vote).
The comparison between capitalism and democracy made here (and in many other places...) is not really fair. Why? Because the (alleged) consequences of capitalism (inequality) are contrasted with the founding principle of democracy (egalitarianism). A more informative comparison would be to compare consequences of capitalism with consequences of democracy, and similarly compare foundations of capitalism with the foundations of democracy.
Doing so reveals that they share some features: The are both, in fact, based on egalitarianism (everyone's right to property and everyone's right to some political rights) and they both result in some inequality (democratic influence and profits will typically not be uniformly distributed).
Still, both systems are doing ok when compared to their alternatives, socialism and dictatorship.
Here are my slides from my presentation at the American Public Choice Society meeting in New Orleans, March 2-4. Full paper is here.
The moldable young (American Public Choice Society 2017) from Andreas Bergh
Institutions, Trust
← Newer Posts Previous Posts →