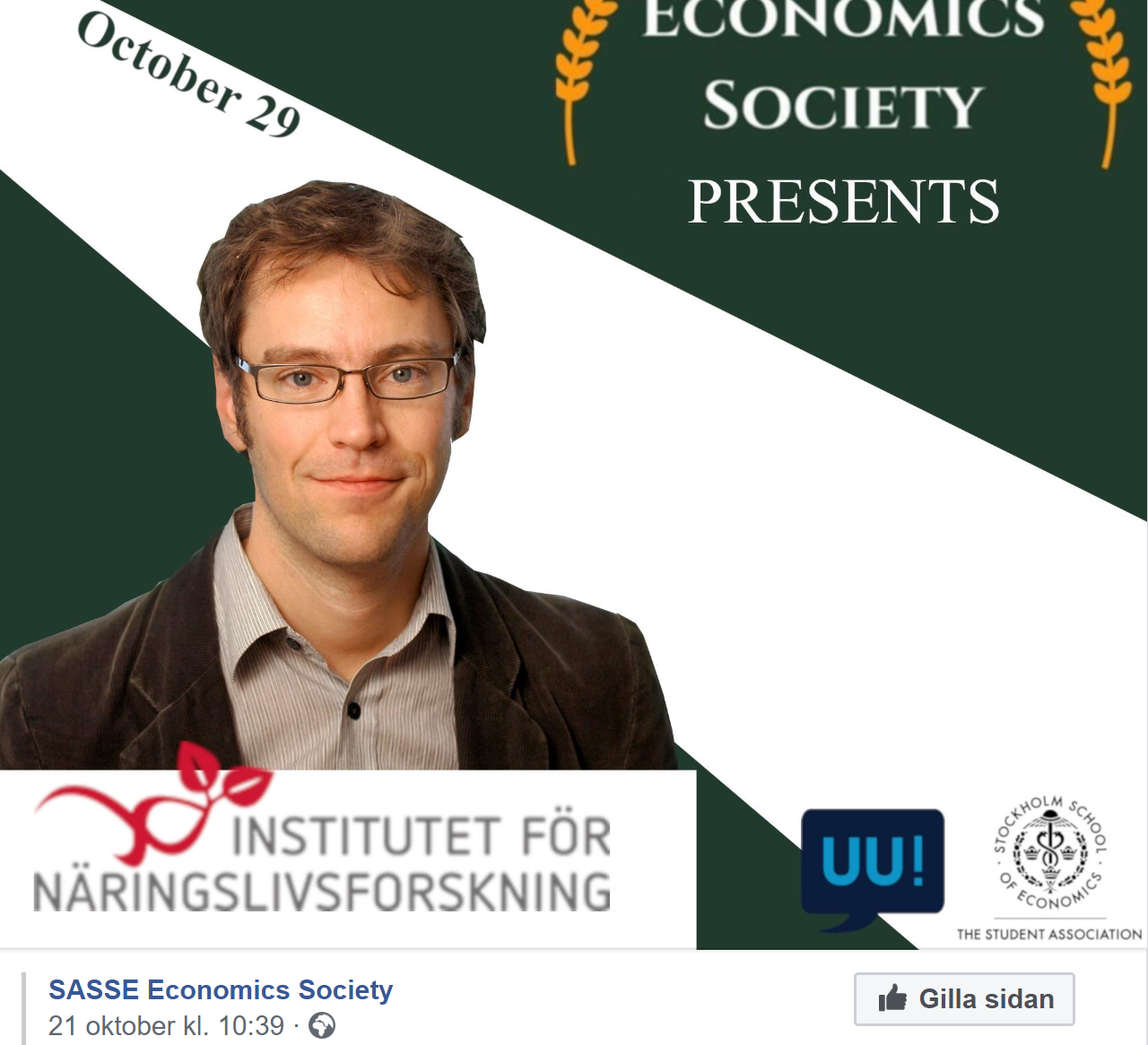 Slides from my talk for the Student's Association at the Stockholm School of Economics are now available at slideshare.
Hayekian welfare states and viking economics from Andreas Bergh
Immediatly after the talk, I discovered yet another book on how to become more like Sweden: 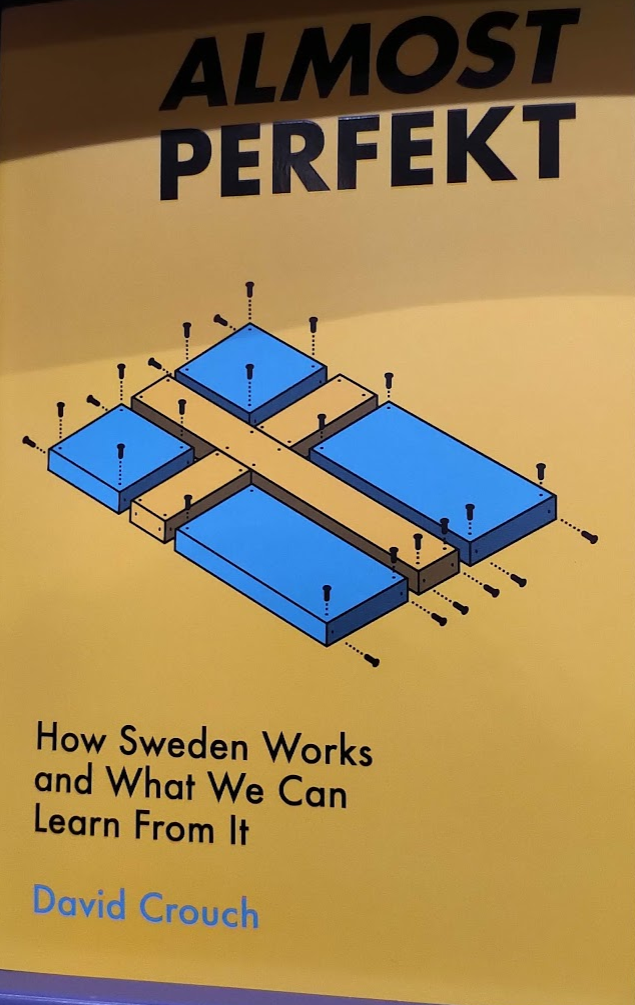 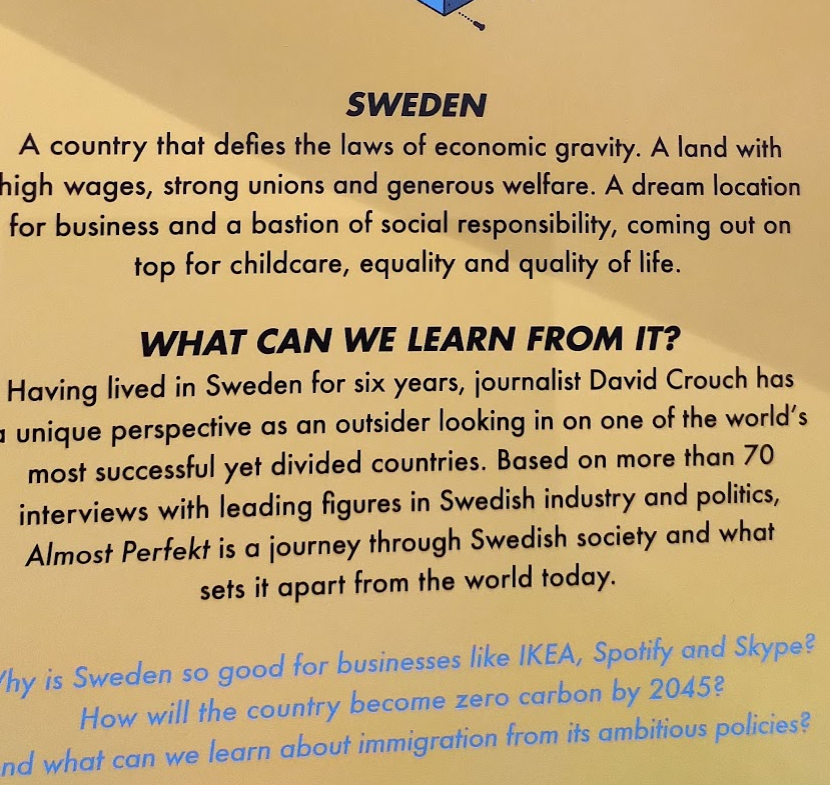 Sweden, Welfarestate, Hayekian Welfare States
I honestly thought the idea that Sweden somehow proves that socialism works had disappeared by now. Still, Michael Munger writes:
I am astonished at how many students, and for that matter adults, in the U.S. honestly believe that the U.S. should model itself after Sweden because Sweden has shown that socialism works.
He goes on to nicely demonstrate why this is simply not true (citing among other sources my book, Sweden and the revival of the capitalist welfare state).
In particular, Munger makes an important point regarding regulation, where I would encourage Swedish policymakers to use other nordic countries as a benchmark, not the U.S.
In terms of deregulation of business freedoms, measured in the Fraser Institute’s "Index of Economic Freedom," Denmark, Finland, and Norway are the 7th, 8th, and 9th most free; Sweden is 12th.
The U.S.? It is 15th. The U.S. is rapidly regulating new industries, and further restricting old ones, at the state level in particular. The expansion of professional "licensing" rules, supposedly for the benefit of consumers but in fact in support of organized corporate interests, is making the U.S. less capitalist every day.
A related question is if the U.S. could become more like Sweden if they wanted to. I think it might be difficult, because even for Sweden, becoming what the country is today, was a bumby road and involved a lot of trial-and-error as well as unintended consequences. I expand on those topics in my follow-up paper on Hayekian welfare states, currently being revised after some conference presentations and feedback. Here is the the most recent wp-version.
From the concluding section:
The lesson for other countries from the Nordics is thus not to copy the blueprint for the Swedish welfare state, for example, but rather to foster the state capacity needed for successful learning from experimentation. Trying to build a fiscally large welfare state without the fundamentals of state capacity and social trust may turn out to be a dangerous strategy. The fact that some countries succeed in combining a large public sector with high levels of economic freedom does not mean that all countries are able to do so.
Sweden, Welfarestate
Downloadable from Repec is a paper that describes the concept of a Hayekian Welfare State, and illustrates using several examples from Sweden.
Abstract:
The idea that all types of economic freedom – including limited government – promote prosperity is challenged by the fact that some countries successfully combine a large public sector with high taxes and otherwise high levels of economic freedom. To explain the co-existence of economic freedom and big government, this paper distinguishes between big government in the fiscal sense of requiring high taxes, and in the Hayekian sense of requiring knowledge that is difficult to acquire by a central authority. The indicators of government size included in measures of economic freedom capture the fiscal size but ignore the Hayekian knowledge problem. hinking about government size in both the fiscal and Hayekian dimensions suggests the possibility of Hayekian welfare states, where trust and state capacity facilitate experimentation and learning, resulting in a public sector that is big in a fiscal sense but not necessarily more vulnerable to the Hayekian knowledge problem. Pensions in Sweden are used as a case to illustrate the empirical relevance of the argument. The new pension system represents big government in a fiscal sense, but by relying on decentralized choice it requires relatively little central knowledge.
Sweden, Welfarestate
In 2011, I published a paper with Christian Bjørnskov, with one of the best titles I have ever come up with:
Bergh, Andreas and Christian Bjørnskov. 2011. "Historical Trust Levels Predict the Current Size of the Welfare State." Kyklos 64(1):1-19.
The ideas is basically that countries with high average social trust (also known as generlized trust or interpersonal trust, and measured by asking people if they agree that mostr people can be trusted) are more prone to creating and successfully maintaining universal welfare states, and that this mechanism is the main reason why trust and welfare state size is positively correlated at the country level (rather than the idea that the welfare state somehow causes trust).
Granted, some might not be entirely convinced by our country level IV-strategy, but there is now individual level evidence published that strengthens our result:
Daniele, Gianmarco, and Benny Geys. 2015 "Interpersonal trust and welfare state support." European Journal of Political Economy 39: 1-12.
Cited from the abstract:
This article argues that citizens' trust in their fellow citizens can play a central role for welfare state support, because it buttresses the belief that others will not use the welfare system inappropriately. Using the fourth wave of the European Social Survey, we confirm a strong positive association between interpersonal trust and welfare state support (controlling for institutional trust). We also show that: i) this link is driven at least in part by the mechanism discussed above; ii) causality runs from interpersonal trust to welfare state support (using a sub-sample of second generation immigrants); and iii) the effect of interpersonal trust appears conditional on the perceived quality of a country's institutions.
Welfarestate
Torben M. Andersen has a new book (co-edited with Michael Bergman and Svend E. Hougaard Jensen), and an official government report (SOU 2015:53, bilaga 4 till Långtidsutredningen 2015) on the welfare state and economic performance. A particularly interesting idea is that Norway, Switzerland and the US are on the best-practice frontier in the efficiency equity space, suggesting that there is indeed some kind of Okun trade-off (pdf), but also suggesting that it is not very steep. 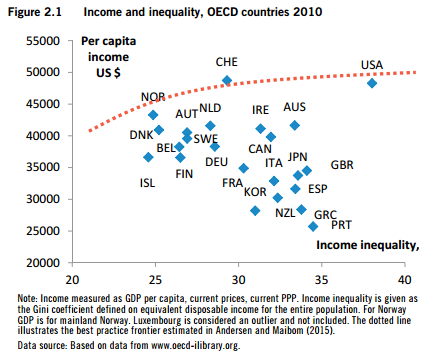 Referring to figure 2.1 above, Andersen writes in the government report:

The analysis shows that
i) the elasticity of the frontier is close to minus one, i.e. a one percent lower equality is associated with a one percent higher income level,
ii) the slope of the frontier has not become more steep over the sample period (1980–2010), [...] and
iii) for the countries at or close to the frontier (best practice countries), there is a significant negative effect of taxes on both income and inequality, as predicted by standard theory.

The idea that a line connecting Norway, Switzerland and the US can be thought of as an efficiency frontier is interesting, but (in my view) misleading. By not accounting for the role of social trust, the trade-off seems less steep than it most likely is.
We know that countries with higher social trust tend to have higher economic growth (Algan and Cahuc, 2010; Dincer and Uslaner, 2010). A link has also been established from social trust to welfare state size (Bergh and Bjørnskov, 2011; Bjørnskov and Svendsen, 2012). Most importantly, social trust seems to cause equality both via the welfare state and directly (ie. when controlling for welfare state spending) (Bergh and Bjørnskov 2014).
The upshot of these findings (not cited by Andersen) - is that the countries on the frontier are improper counterfactuals for each other. A comparison between any Nordic country and the US is a comparison of a high-trust country to a medium-trust country. As a result, the efficiency-equity trade-off will appear relatively flat.
In reality, however, we simply do not know how USA would perform with tax revenue around 50 percent of GDP, as was the case for Sweden in the 1980s and still is the case in Denmark. Similarly, we do not know how a country with Nordic trust levels would perform with a public sector of US-size. Inference regarding the efficiency-equity trade-off should be based on cross-country evidence that control for trust. As a simple alternative we could draw the frontier between the US and a country with similar trust levels and higher equality, such as Austria or Germany (all with trust around 40 percent).
In any case: If we accept that Figure 2.1 can be thought of as a best practice frontier, the most striking pattern is arguably that most countries exhibit strikingly high levels of inefficiency.
---
Algan, Y., and Cahuc, P. (2010). Inherited Trust and Growth. American Economic Review, 2060-2092.
Bergh, A., and Bjørnskov, C. (2011). Historical trust levels predict the current size of the welfare state. Kyklos, 64, 1-19.
Bergh, A. and Bjørnskov, C. (2014). Trust, welfare states and income equality: Sorting out the causality. European Journal of Political Economy 35:183-199.
Bjørnskov, C., and Svendsen, G. (2012). Does social trust determine the size of the welfare state? Evidence using historical identification. Public Choice, 1-18.
Dincer, O.C., and Uslaner, E.M. (2010). Trust and growth. Public Choice, 142, 59-67.
Welfarestate